Not For Unsteady Souls 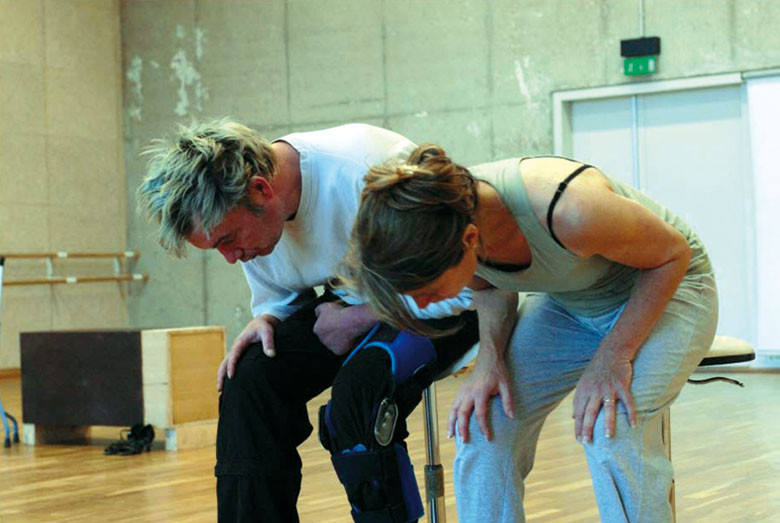 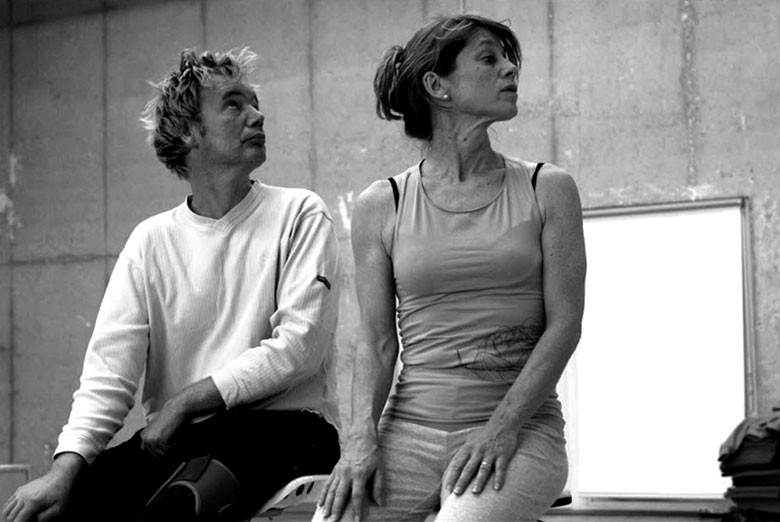 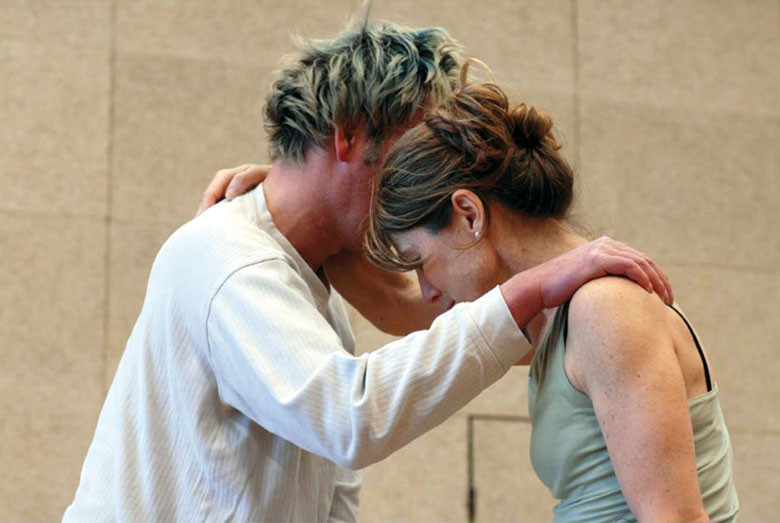 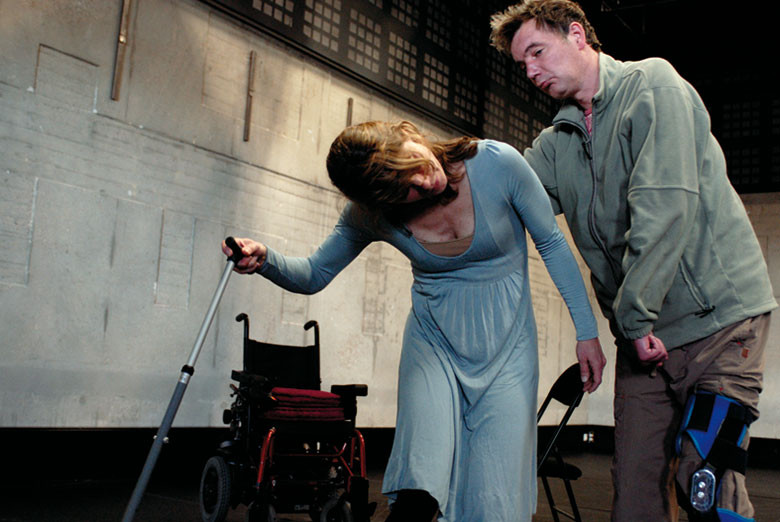 “Tetraplegic paresthetic. It’s August, 2003, and the doctor seems very happy announcing this to me. Happy, I hear by the sound of his voice because I can’t see, I can no longer see. Tetraplegic, the word is terrible. I’m 38 years old, outside the weather is beautiful, the sun inundates this heatwave summer, and I plunge into winter. February 2007, Priscilla tells me of her desire to make a dance together. I am not a dancer, I never was. And then, what could I say with this body which is in the end so unknown to me, and yet here I am, on the stage, paralyzed and not only by stagefright. I have tried to accomplish this long road which leads me to you today. Priscilla was my companion, my guide along the way. By her side I’ve attempted to re-inhabit this body, so fragile and cumbersome. How to transform lead into a feather? Lovely question for the alchemy of dance. The result, you will see, but it is less important to me than what you won’t see, that is, the progression, the experiences that this body has lived through.
Tetraplegic, but what can that mean as long as I imagine myself a bird? If you see in me an anvil, it is your eyes that are deceiving you, because I can assure you, I am a bird.”
Vincent Fritschi, December 2007 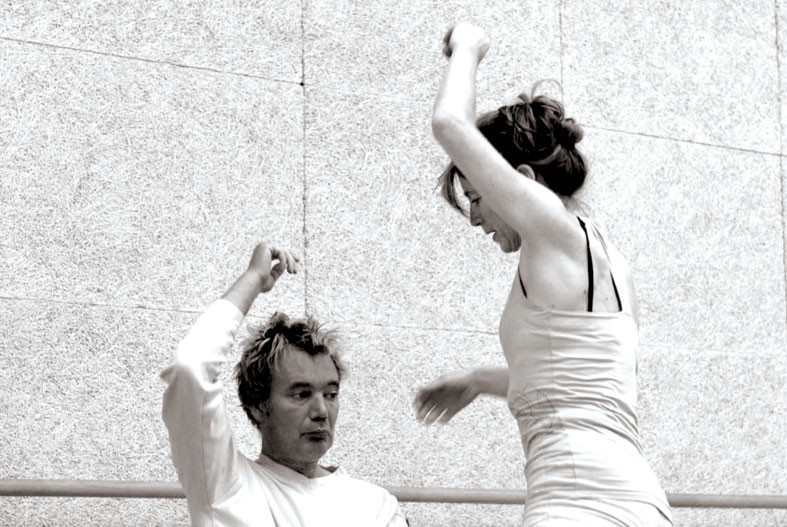 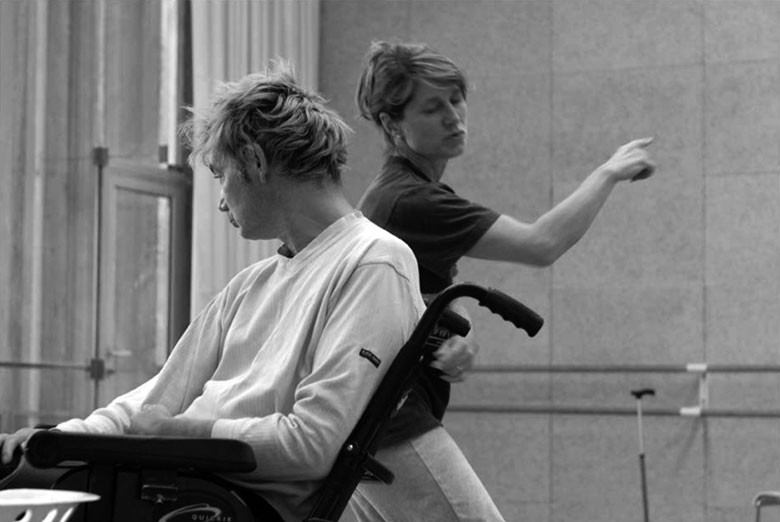 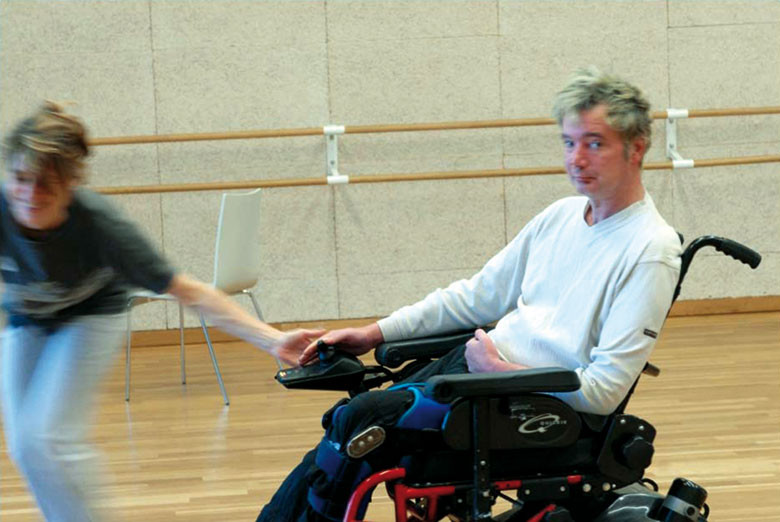 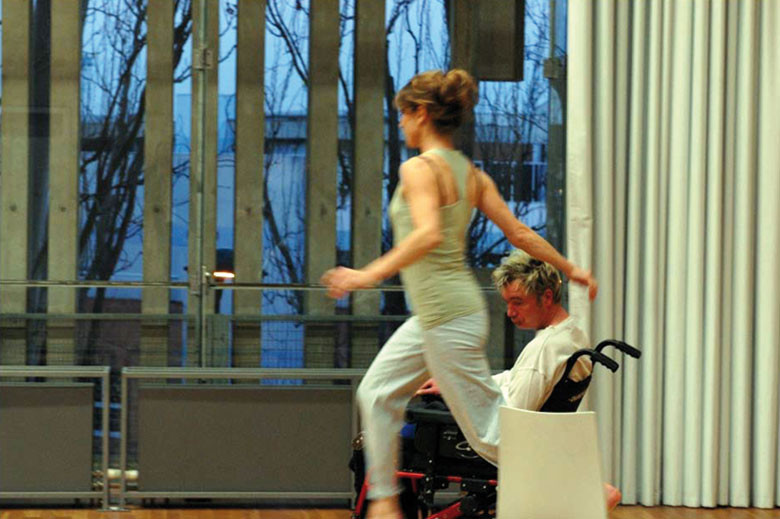 “She is sitting center stage, awaiting the challenge. He, in his chair, measures the abyss that separates them. And yet this distance he slowly travels. She joins him and they begin a dance that will bring them together for thirty minutes. This duet, of body and soul, and broken body, is an invitation, to show us that if we are all unsteady in one way or another, we can still lean on each other. In this equilibrium, fragile but regained, the two dancers lead us in a search for LIFE. On stage there are only a man and a woman, who lose and find their balance with each other, in order to come together.
Is the abnormality in the eyes that are watching, or on the stage?
Let us plead for a rediscovered humaneness.”
Vincent Fritschi 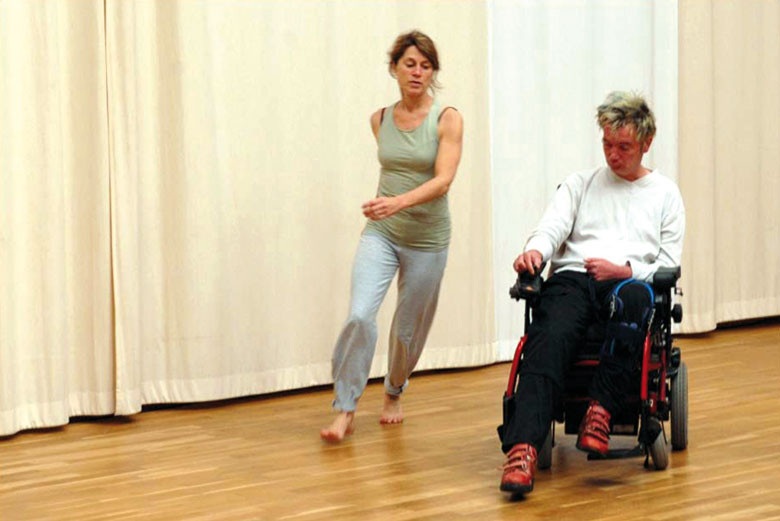 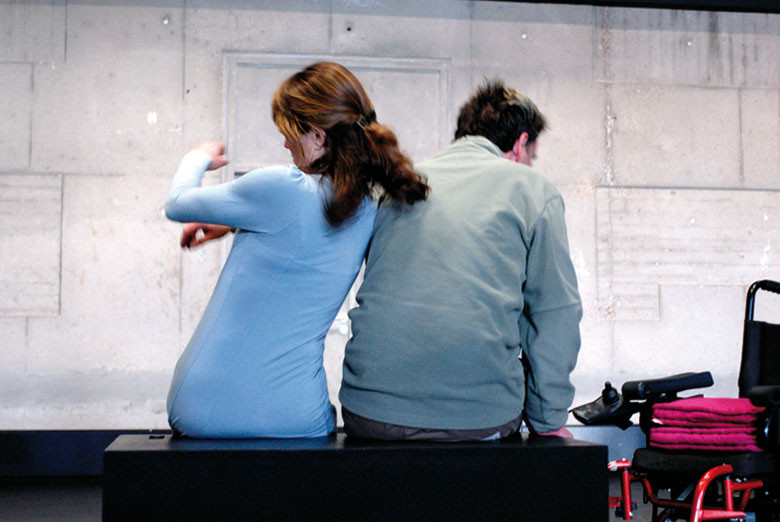 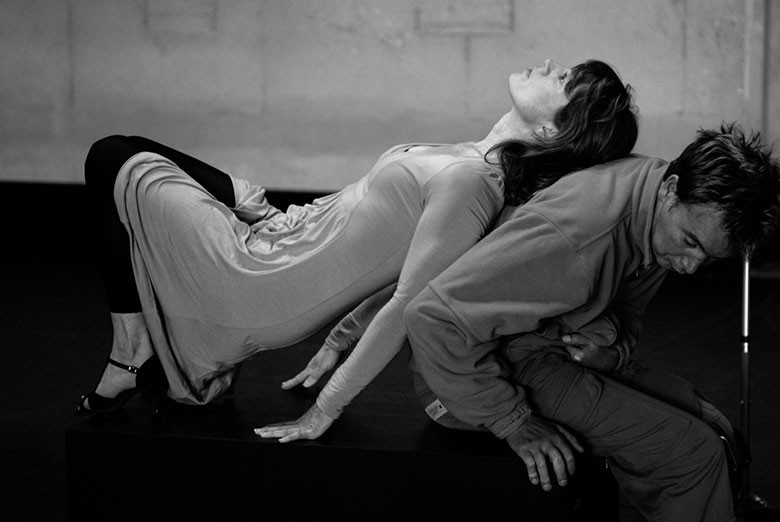 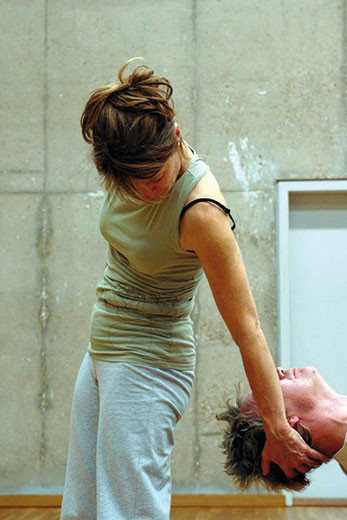 Vincent Fritchi was co-founder and actor at the Théâtre des Ateliers in Aix-en-Provence, directed by Alain Simon. From 1992 to 1995, he went to live in Sarajevo, where he co-founded the Centre Culturel Français André Malraux in 1993. Upon returning to France, he worked at the Scène Nationale de Bonlieu in Annecy, in charge of Public Relations. In 2003, for unknown reasons, he fell into a coma, awaking three months later severely paralyzed and visually impaired. Unable to read, he organized public lectures at Bonlieu by different figures from the French theater world, among them Michel Piccoli, Hanna Schygulla, Denis Lavant, Dominique Blanc, Jean-Claude Carrière… After an initial trip to Tunisia, in May 2011, “to see the revolution in the making”, he returned to live there for a year and write a book, Premier pas à Tunis. 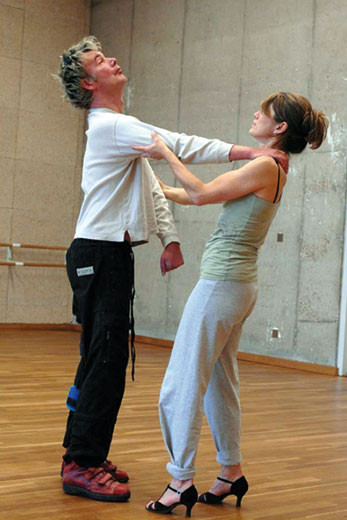 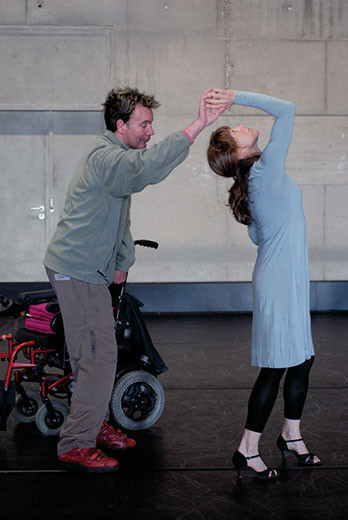 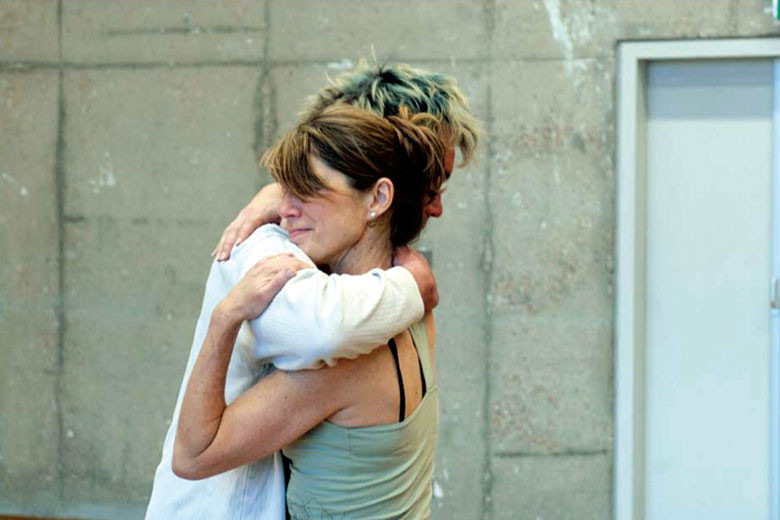 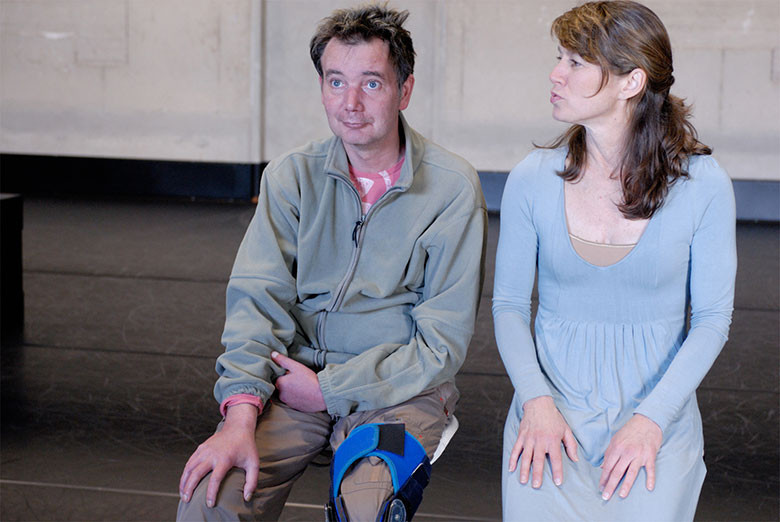 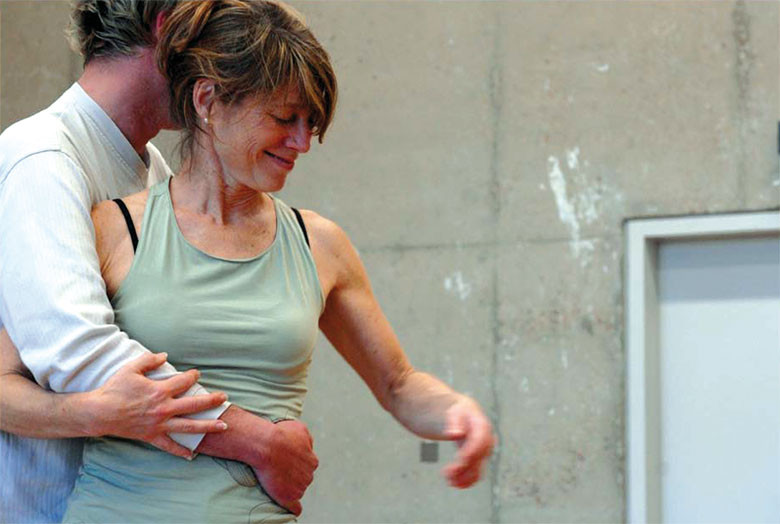 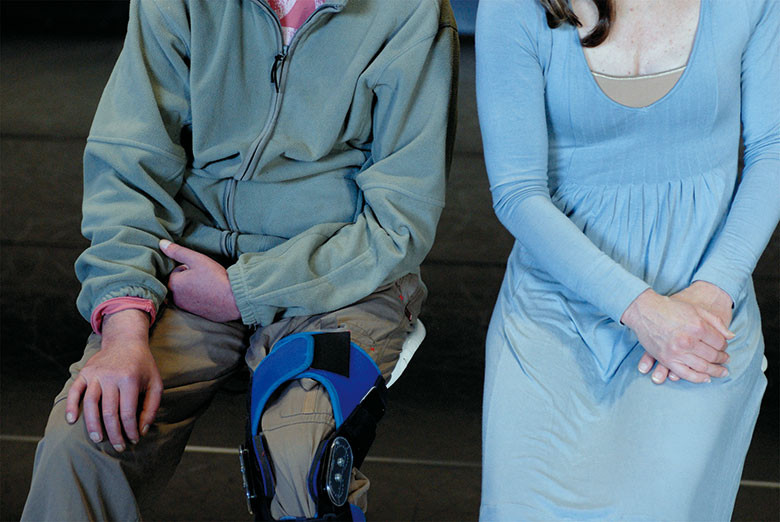 Tango for Two and Three-Quarters
for Priscilla and Vincent

Dance, you’d said, was not
for unsteady souls. Last night,
Mr. Cunningham,
we let them stretch, bend and flex
our minds beyond your decree –
poised on the brittle
wings of an urgent thought: what
of bodies, they asked.
A double duet of eyes –
one set blue, the other brown
(with specks of beryl) –
that soared, dipped and swooped
through a maze of minds,
leaving behind curlicues
of smoking questions as gifts.
Yes, bodies are a
different matter; whether
broken, spent, even
absent – damaged goods that try
to mend, or follow the beat
of souls striding forth
on firm feet to a stage primed
for the strange dyad:
a man who’d stopped walking and
a woman who danced no more.
Heads, limbs and torsos
featured but they’re valiant hearts
that took centre-stage
as elisions of flesh shared
hushed backdrops with future ghosts.
An adagio played
on will and a walking-stick
(three-pronged, grey-and-white);
glissades with a motorized
wheel-chair for verve, whim and grace;
closed with the embrace
of unborn hope – a tango
for two and three-fourths.
Yes, bodies will dance where souls
hear music in every breath.